Designer Jun Takahashi is a big deal. From humble beginnings in the lush mountainous of Gunma in Japan he now operates on the global stage with annual collections at Paris plus mainstream collaborations with Nike and Uniqlo. But it all started with the fashion brand UNDERCOVER,  which he founded together with Ichinose Hironori, while still studying at the Bunka Fashion College, Tokyo. Momentum behind UNDERCOVER really began to take hold in 1993, when young Jun teamed up with everyone’s favourite purveyor of primate couture Nigo to open up a store called NOWHERE.

It turns out the ‘Nowhere’ is actually in the trendy Tokyo district of Harajuku (coolest fashion area), and with the support of the founder of A Bathing Ape, things started to pick-up for UNDERCOVER. With his unique worldview and cutting-edge style, he garnered fierce support amongst young people, and was a front-runner during the 90s UraHara movement, a movement based in the very same area of Harajuku. He made his Paris debut in the Spring/Summer Collection in 2003, following up with annual appearances ever since. In 2010, he announced a collaboration with Nike entitled GYAKUSOU. In 2013, he collaborated with Uniqlo to create UU, which rolled out across 11 markets. 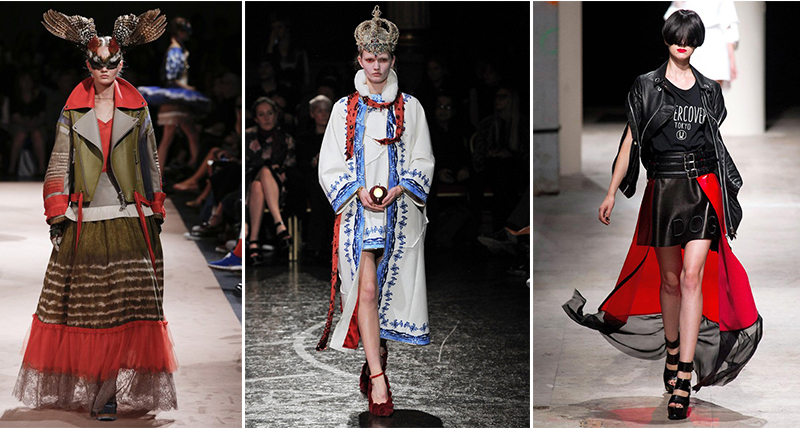 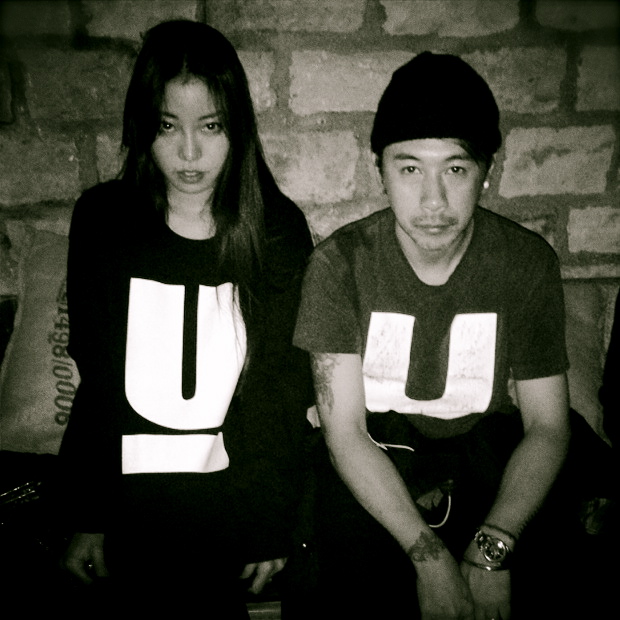 SaraWaka was introduced to Jun in the Parisian night-spot Club Silencio by her half-French-half-Japanese friend Ben. Apparently, in lieu of a simple enchanté, her first words to poor Jun were drawn from some old hippy dictionary or something: “I feel such a strong connection to you all…” It had been one of those nights. With that not kicking the conversation into action, SaraWaka resorted to online-dating 101 questions such as: “So… what do you do for work…? What brings you to Paris…?” It was as interesting as it sounds, like two awkward overseas students on their first ever trip to a night-club.

Looking back, she does kind of regret asking such a bland question of a world-class designer, but you have to start somewhere, right? Her regrets don’t stop there: her next move was to – again apparently – rub the beautiful bald head of Go, Jun’s business partner. Who hasn’t done that, right? Right?!!? Just another night that clearly illustrates to SaraWaka’s friends that perhaps a little longer in the straight-edged Japanese education system might have done just a little good.

SaraWaka: Jun! Wassap? How are you?

SaraWaka: I am taking it seriously, so relax! Wakapedia has a casual vibe, but we do interviews properly! Our billions of readers seem to like it so far [another giggle].

SaraWaka: We’ll start with a rather vanilla question: what type of brand is UNDERCOVER?

Jun: Hmmm…. [silence]… that’s a rather abstract question…The actual brand concept is the output of the image I have in my head as each season comes around, so in that sense it changes. I’m from Tokyo, so I mix my own street style and music with lots of different concepts and create something new. Things that I want to do or are interested in become inspirational. So the brand is equal to what’s in my head. Kinda.

SaraWaka: In other words, UNDERCOVER is the physical manifestation of what’s in your mind?

Jun: Yeah, that’s about right. Whatever the concept, I want to bring it to life in a number of different ways. So if we have the theme of elegance for example, behind that we have the grotesque or the insane, and I want to express them as well.

SaraWaka: True, in this show also you have this almost angelic cuteness coupled with darkness, reminiscent of the Black Swan.

Jun: Yes. This time we start with an innocent object, all bright and sparkly; by the end the gloss had disappeared. The concept is that of a woman who experiences a lot and becomes stronger for it.

SaraWaka: So that was the story behind it all! So… what you are trying to say is that as a girl becomes a woman she slowly becomes dark? [giggles at her own cynicism]

Jun: Of course [giggles back]. When you become an adult, those parts begin to appear, are necessary even.

[SaraWaka’s friend Gianluca Cantaro enters stage right. When not being giggled at because of his strangely Japanese name [BJ: Taro is the John of Japanese names and there are many a Kentaro, Juntaro and even a Kintaro. Now we have a Cantaro too.], the 100% Italian Cantaro-san is the editor-in-chief of L’OFFICIEL ITALIA. He is a huge fan of Jun’s. The two of them begin talking passionately about fashion; SaraWaka is left in the cold…]

SaraWaka: Ahem… so this UNDERCOVER/Nike collaboration GYAKUSOU… how did that all come about? 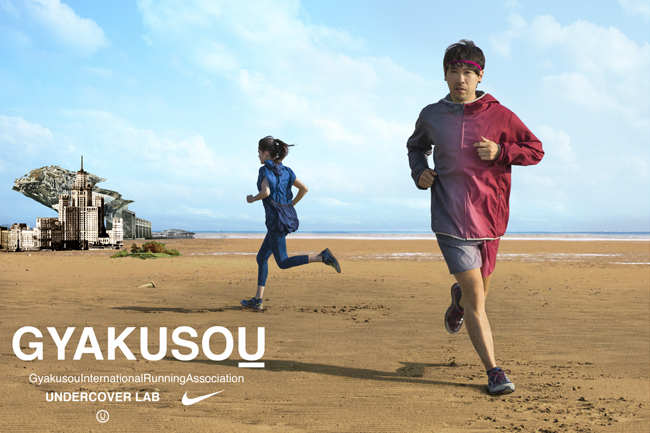 Jun: What? Oh, someone at Nike heard that I was a long-time marathon runner and they came over with an offer. To be honest, I had gone to buy running gear before but couldn’t find anything I liked, to the extent I found myself running in more outdoorsy stuff. So I liked the idea of designing something myself. I wanted to make practical running gear with a new sense of design.

SaraWaka: Yeah, the GYAKUSOU line is cool. Not that I can afford it right now [giggles]. Next question: what is art for you?

Jun: Art is… [silence, once again] Drawing is something I have always done since a young age, and I am blessed that I now make a living from it. Making, creation – that process of realizing something tangible from essentially empty space – is what I do. Art is essentially the way I express myself; the one and only method of expression for me.

SaraWaka: Hmm. I would love to take a dip into that brain of yours. I imagine I would see some incredible things. [giggles]

SaraWaka: So… we now come to the end of the interview and the way Wakapedia interviews always end is… with a kiss please!

SaraWaka: In Europe, kissing is part of the traditional greeting, right? So at the end of the interview, I always ask for a kiss. May I have a kiss puhleaase!?

Jun: [Jun’s lips move to SaraWaka’s cheek, with the look of defeat in his eyes] Mwwa. 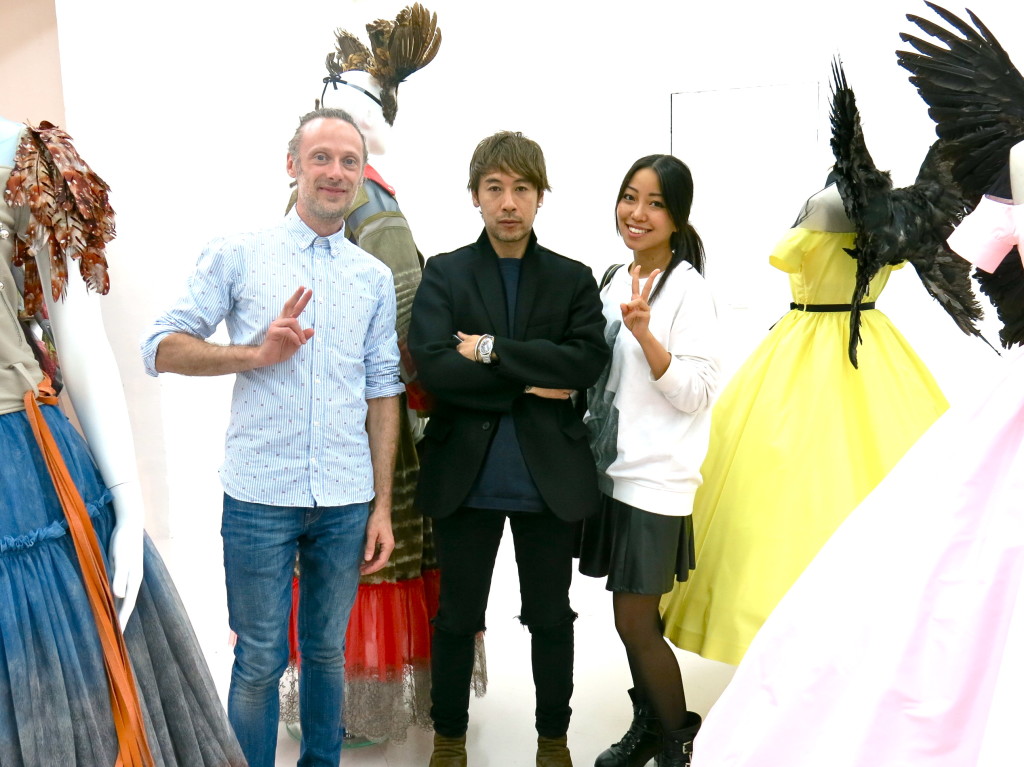