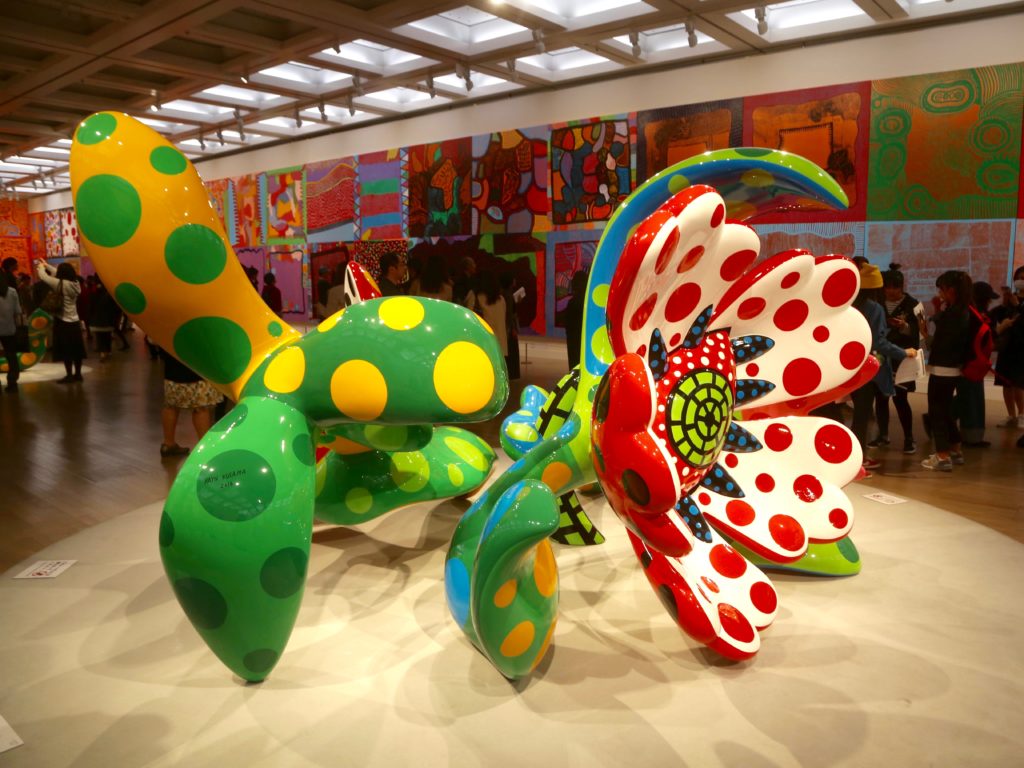 ‘All About Love’. This title of a piece of one of Kusama Yayoi’s artworks displayed in the first huge room at Tokyo National Art Center (where ‘YAYOI KUSAMA – MY ETERNA SOUL’ exhibition will be on till 22nd of May 2017), can be taken as the emblem of the whole Japanese exhibition. Kusama Yayoi’s art, in fact, is all about her deep love for art forms which accompanied her throughout her entire life.

Stepping into the exhibition I was welcomed by a broad room full of multicolored paintings. Here it has been placed the all collection from the last decade production by Kusama. At the 9th decade of her life, the eclectic woman seems to getting back to her past production, trying to summarize it in Instagram-squared-frames paintings and huge 3D flowers (“Flowers that bloom at Midnight”, 2009 – fig. XX).

The exhibition tour, then, carries on starting from the young works of the artist, which are totally different for the ones we use to identify the artist with. In fact, Kusama’s artistic production has been always liked to her life experience, clearly seeing the change of style depending on what she was experiencing, by moving to New York or coming back to Japan. 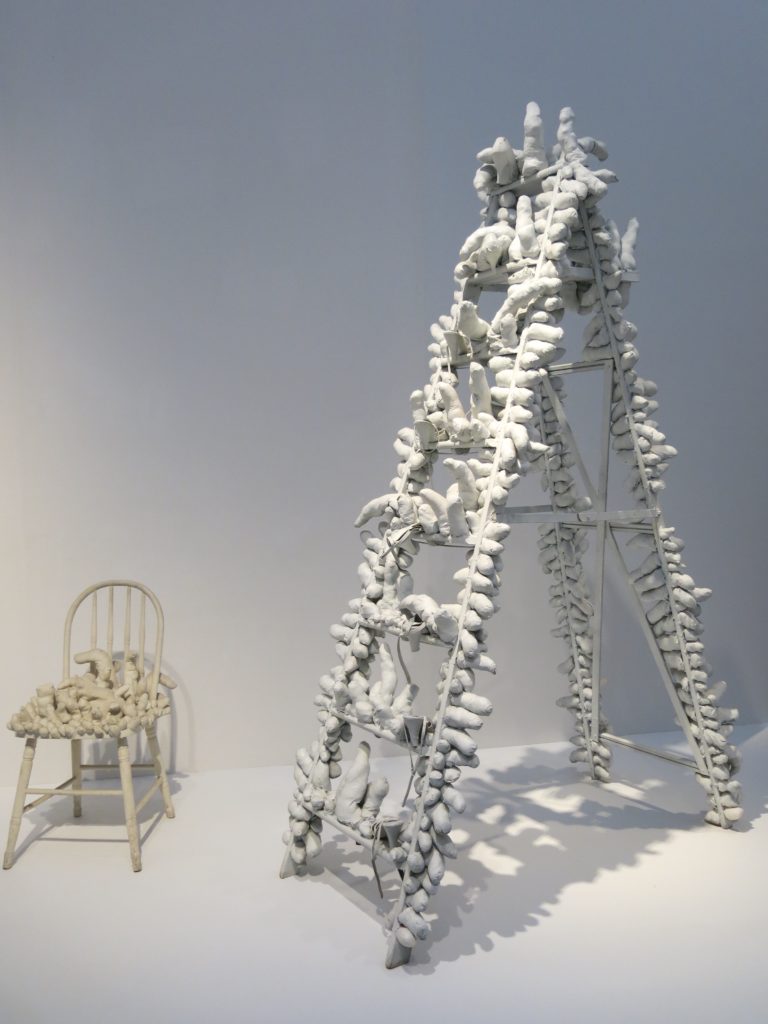 Starting with her earlier production, here it is obvious the quite influence of Japanese culture, in fact, paintings subjects are represented by still life subjects and traditional oils on canvas (“Onions”, 1948 fig. XX). It is from the 3rd room that we can actually get into Yayoi Kusama world: this step coincides with her moving to New York in 1957. Living in the Big Apple she started to get involved in the hippy active movement. At that time the artist started to express her hallucinations by means of the obsessive polka dots’ pattern (as for instance in the ‘Pacific Ocean’ work, 1960 – fig. XX). Using the artist’s words:

“This endless repetition was an exercise in self-liberation from my oppressive mental state”.

During ‘60s years she started to produce 3 dimensional objects, that she called “Soft Sculptures” due to the fact that they are made with fabric material. Gazing at these sculptures there is no doubt about witch one was the obsession Yayoi was experiencing: all the objects are covered by phallic forms and polka-dots, these are a true representations of her fear toward sex.

So Kusama Yayoi spent the ‘hippies years of the ‘68s’ in New York taking active part in happenings and “Make-Love-Not-War” activations. We can see it in her “Self-Obliteration” series (1967) which came to life first by countless happenings and, eventually, they turned also into a short-movie where she walk naked through NY streets or dressing a kimono and covering walls with polka dots. 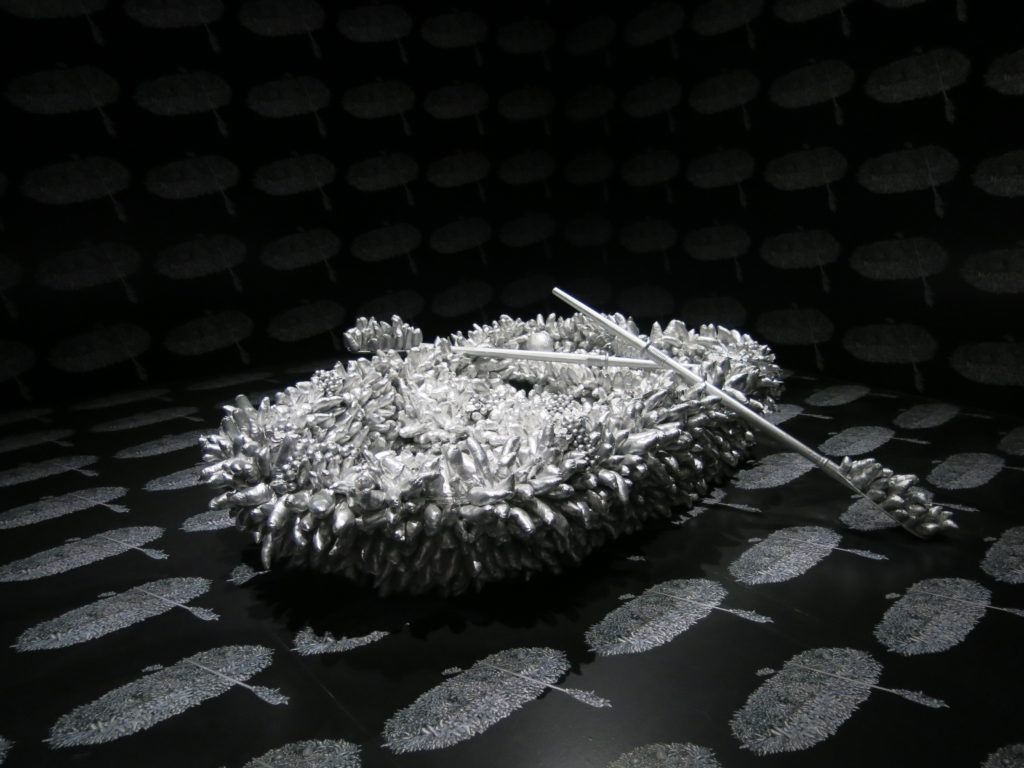 From the 1970s her style gets a sharply change, becoming darker and sorrowful. In 1970 year, infact, Yayoi came back to her native place, Japan, that was not ready to understand her strong impact art. Furthermore, Kusama Yayoi in 1972 experienced the death of her lover, the artist Joseph Cornell, and this death topic come out often from her series (“Now that you died”, 1975 – fig. XX).

It is only after going back to U.S. that the artist could fully express herself, and we see again her “joy de vivre” in the even more colorful polka-dots realization which brings her a worldwide fame.

As I’ve already experienced in London in 2002, in the TATE GALLERY’s exhibition dedicate do Yayoi, also here I could pass through the “mirror Room” (Lover Forever, 1966) – which is a real hallucinating trip into her work. But, to be honest, from the so called “Greatest Kusama Yayoi’s perspective” in her born Country I would expect little bit more than that. Is Japan not still ready to accept her crazy way of seeing the reality?